We now have a Hyperbaric Chamber in Newcastle Sprouting Health 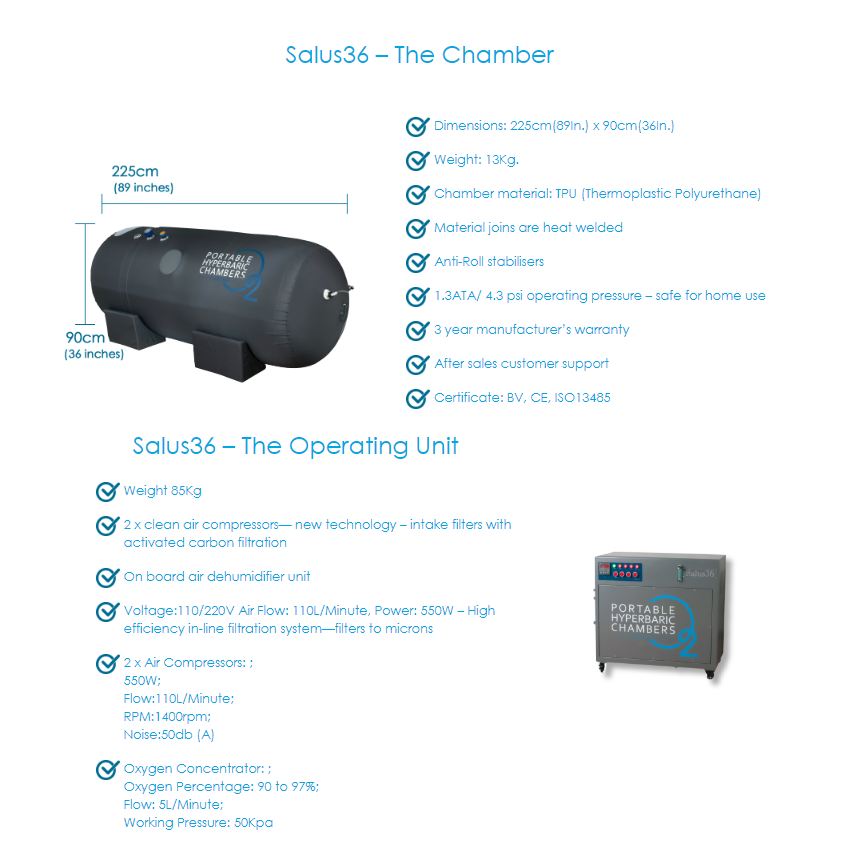 ​Hyperbaric oxygen therapy (HBO) is defined by the Undersea and Hyperbaric Medical Society (UHMS) as a treatment in which a patient intermittently breathes 100% oxygen while the treatment chamber is pressurized to a pressure greater than sea level (1 atmosphere absolute, ATA). Our Hyperbaric Chamber is hence defined as Mild Hyperbaric Therapy as it does not reach 100% oxygen. There is a safety advantage with this, however analysing the research it must be noted that direct indicators cannot be compared as most research has been carried out with 100% oxygen. Note our regular earth atmosphere is about 21% oxygen, our chamber is still a lot more concentrated than you would regularly breathe. There is a not huge amounts of quality evidence available on HBO, however some evidence on Hyperbaric Therapy is detailed below.

Hyperoxia in normal tissues due to HBO causes rapid and significant vasoconstriction, but this is compensated for by increased plasma oxygen carriage, and microvascular blood flow in ischaemic tissue is actually improved with HBO. Such vasoconstriction does however reduce post-traumatic tissue oedema, which contributes to the treatment of crush injuries, compartment syndromes and burns (1).

HBO also limits post-ischaemic reductions in ATP production, and decreases lactate accumulation in ischaemic tissue (1). Another study identified in 2019 that a single session of hyperbaric oxygen therapy demonstrates acute and long-lasting neuroplasticity effects in humans (2).
There is a growing body of evidence to suggest that HBOT is a noninvasive modality with lasting efficacy and minimal side effects that can be used to treat chronic pain conditions (3). HBOT leads to a net gain in oxygen concentration in tissues and subsequently induces neovascularization and angiogenesis, restores tissue homeostasis, and enhances leukocyte function. Recently, published animal and human studies have indicated that HBOT induces an analgesic effect in nociceptive, inflammatory, and neuropathic pain models and may be useful for the treatment of various chronic pain syndromes, although the mechanism is not well understood (3). Early clinical research demonstrates promise for the use of HBOT in the treatment of several human pain syndromes such as Headache, Fibromialgia and Complex Regional Pain Syndrome.
For Headache one trial treated patients with a single HBOT treatment of 60 minutes, while one trial treated patients with 30 minutes of HBOT on 3 consecutive days. Together, they provide some evidence that HBOT is efficacious in relieving an acute migraine attack, but not in preventing future attacks (3). For CRPS and Fibromyalgia both trials showed positive results with 15 90 minute sessions over three weeks (3).
A systematic and comprehensive literature review demonstrates that, despite the controversy surrounding HBOT for the treatment of Traumatic Brain Injury (TBI), this therapy has significant clinical potential. Hyperbaric oxygen therapy targets TBI-induced ischemia by exposing patients to an environment that substantially increases the amount of O2 inspiration, producing an increased O2 concentration in the plasma and thus increased delivery of O2 for diffusion to brain tissue (4).

There is also promising research using Hyperbaric Oxygen Therapy with cancer management.  Alone Hyperbaric Oxygen Therapy  has been shown to inhibit tumor growth, reduce tumor blood vessel density, and induce the preferential expression of anti-cancer genes in rat models of mammary tumors (6). In fact, hypoxic cancer cells are three-times more resistant to radiation therapy than are well-oxygenated cells (6). Tumors possess abnormal vasculature which blocks adequate tissue perfusion, leading to the presence of hypoxic regions that promote chemotherapy and radiation resistance (6). In a comprehensive review of the literature on the use of Hyperbaric Oxygen Therapy for cancer ref 59 in our ref (6). The authors concluded that Hyperbaric Oxygen Therapy (HBO 2 T) should be considered a safe treatment for patients with varying malignancies and that there is no convincing evidence its use promotes cancer progression or recurrence. In the literature, there are a substantial number of studies indicating that HBO 2 T can induce marked anti-cancer effects in vitro and in animal and human studies alike ref [58,59,92 in (6)]. Evidence is mixed, however, as other studies reported no effect with HBO 2 T [ref 58,59 in (6)]. The authors commented – “Indeed, in our present study, HBO 2 T alone did not improve the outcome of VM mice with metastatic cancer, but combining HBO 2 T with a Ketogenic Diet (KD) elicited a dramatic therapeutic effect. It is important to look for synergistic interactions between therapies which may increase the efficacy of cancer treatment. Scheck and coworkers reported complete remission without recurrence in 9 of 11 mice with glioma by combining the KD with radiation [93 in (6)]. The authors further comment: “Our study strongly suggests that combining a KD with HBO 2 T may be an effective non-toxic therapy for the treatment of metastatic cancer. The efficacy of combining these non-toxic treatments should be further studied to determine their potential for clinical use. Based on the reported evidence, it is highly likely that these therapies would not only contribute to cancer treatment on their own, but might also enhance the efficacy of current standard of care and improve the outcome of patients with metastatic disease” (6).

In summary, HBO has complex effects on immunity, oxygen transport and haemodynamics (blood changes). The positive therapeutic effects come from a reduction in hypoxia and oedema, enabling normal host responses to infection and ischaemia.

More research is needed on HBO effects. For a comprehensive list of recommendations in the literature see appendix from (5).

The only absolute contraindication to HBO is an untreated tension pneumothorax, and this must be excluded before treatment (1) Relative contraindications include impaired pressure equalization, and cardiac disease (1).